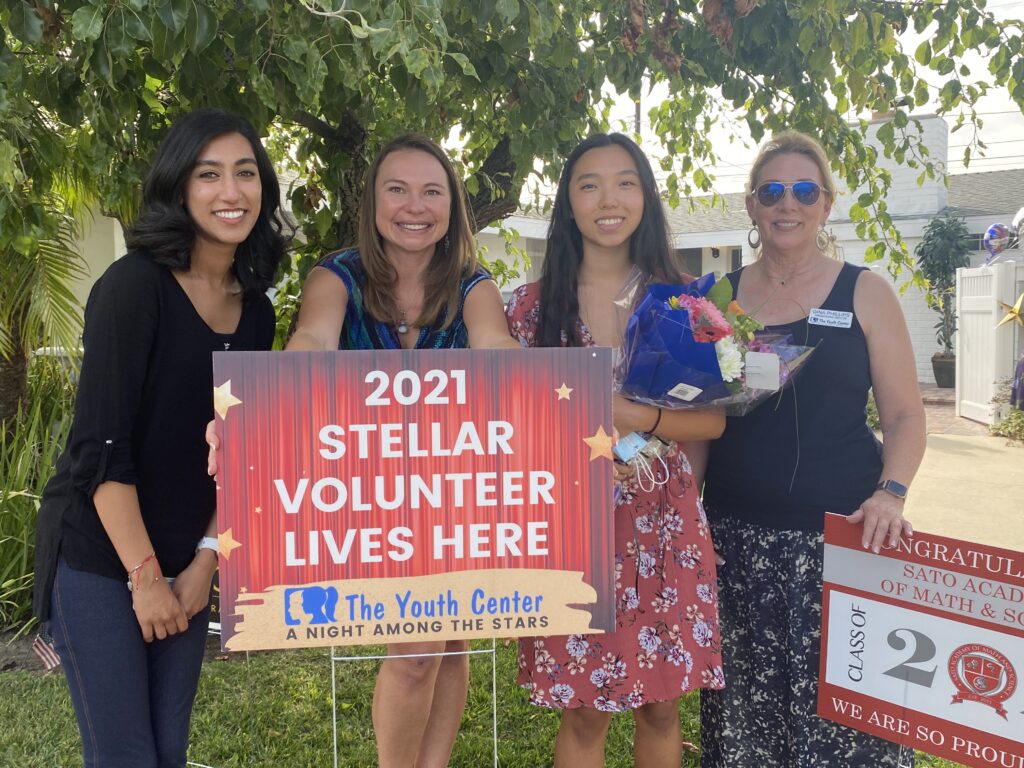 Each year, the Youth Center receives hundreds of nominations for the Stellar Volunteer awards, each nominated for their amazing commitment to give back to their community.

Lina Lumme, Executive Director of The Youth Center said, “It’s easy to give up and do nothing. These Stellar Volunteers give their time and talents to offer us all a brighter future by making a difference in our community, and we feel it is our honor and duty to recognize them.”

Kirsten Okamoto was honored to receive the first ever $500 S.E.T.H. Memorial Scholarship award. Kirsten is a Girl Scout of 13 years and a high school senior living in Rossmoor, who exercises her leadership to care for others and the environment. She is particularly interested in the area of Science, Technology, Engineering and Math (STEM) and encourages other young girls to focus their energy there as well. She recently attended the SATO Academy of Math and Science in Long Beach with a goal of becoming an electrical engineer.

In late 2019, Kirsten received the Girl Scout Gold Award for her project on marine mammal rescue and conservation, focusing on the Seal Beach / Long Beach area, bringing awareness for seals, sea lions, and their marine environment. In 2020, the Orange County Girl Scout Council honored Kirsten with the Girl Scout Take Action Award. This award recognized Kirsten for making a lasting impact through identifying community needs, resourceful problem solving, advocacy, and educating and inspiring others to act to make the world a better place. She served as a Girl Scout USA (GSUSA) delegate to both the “The United Nations” 2020 64th and 2021 65th World Conference for the Status of Women (CSW). In order to be named a GSUSA delegate she had to undergo a rigorous selection process and interviews. During the pandemic, Kirsten helped to create and teach the curriculum for a 6-week virtual series on Global Gender Equality. She taught this series to young Girl Scouts across America and Girl Guides Internationally and was the GSUSA event speaker at the 65th CSW Conference, held virtually on March 16th, 2021, speaking to World Leaders on the importance of girls developing civic and political leadership in support of the “girl child”.

Kirsten also served as a member of the National Charity League (NCL) for the last 5 years and has won several awards, held board positions (Parliamentarian, Secretary, Historian), and has logged 350+ hours of community service working with many of the local non-profit organizations that serve women and children. At Precious Life Shelter in Los Alamitos, Kirsten helps homeless women, victims of domestic violence, and human trafficking by providing emotional support and caring for their newborns so they can attend classes and complete their GED. Kirsten helps children and teens with physical and mental disabilities participate in social outings such as bowling, going out to lunch, and attending prom.

In the summer of 2019 Kirsten was also a summer intern for Leadership Initiatives (L.I.) at Georgetown University in Washington, D.C., where she had the opportunity to meet with the Offices of Congressman Alan Lowenthal and Senator Kamala Harris to advocate for laws preventing gender discrimination, sexual assault and harassment, and workplace retaliation. Kirsten also discussed the importance of funding for STEM educational programs, especially for girls and students in underserved communities. Kirsten also advocated on Capitol Hill for equality for women within the workplace and worked on a court case regarding gender discrimination. Kirsten’s role was to prepare the plaintiff for trial.