The Mission of The Youth Center is to transform children’s lives one family at a time through collaborative social, educational and recreational programs. Since the birth of the Youth Center in 1952, this charity has been honored to have the opportunity to establish valuable partnerships within the community. The Youth Center takes deep pride in the stellar network of collaborators. The Youth Center fully acknowledges their critical importance in this organization’s levels of current and future success. 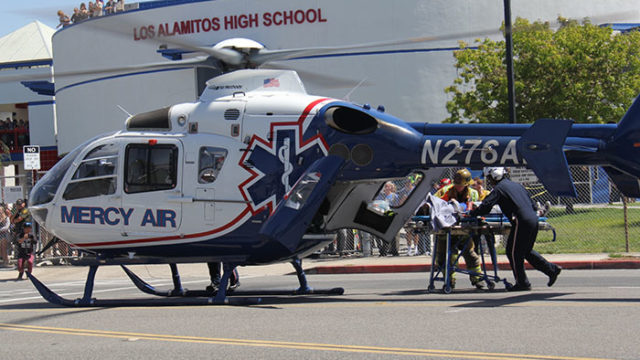 Pictured: Mercy Air, a collaborative partner of our Every 15 Minutes program 2015.

Along with the District administrative and governance teams, every individual campus is considered a crucial, cooperative, and active Youth Center partner. Disseminating program information to the students, hosting Elementary After School Music and facilitating the Every 15 Minutes program is only a small sample of the school district’s commitment to The Youth Center.

In 1960 the City of Los Alamitos was officially incorporated. Since this time, The Youth Center has worked closely with its leadership to insure proper delivery of programs important to our community. When the current Community Center complex (Community Center, Youth Center and Gymnasium) was built, The Youth Center joined with the city and school district in providing initial development funds. Since that time an important, unique and symbiotic relationship has existed between the three organizations.

In 1990, Rossmoor Community Services District began to underwrite The Youth Center’s Summer Day Camp to provide productive youth activities in Rossmoor. Now, over 450 children are involved in this summer camp as it has developed into one of the most popular program in the area.

Since 2006, Seal Beach Lions and Leos Clubs have been instrumental in providing volunteer support for many Youth Center programs and events. Both clubs contributed a significant amount of community service hours to Leadership Academy, A Night Among the Stars, Christmas Tree Lot, Every 15 Minutes program and other special events.

The Youth Center is honored to have a strong partnership with all the businesses and individuals that provide support.