Who We Are and Our History

Since 1952, The Youth Center has served over 100,000 local families. Our mission is to transform children’s lives one family at a time through collaborative social, educational and recreational programs.

The Mission of The Youth Center is to transform children’s lives one family at a time through collaborative social, educational and recreational programs. Since the birth of the Youth Center in 1952, this charity has been honored to have the opportunity to establish valuable partnerships within the community. The Youth Center takes deep pride in the stellar network of collaborators. 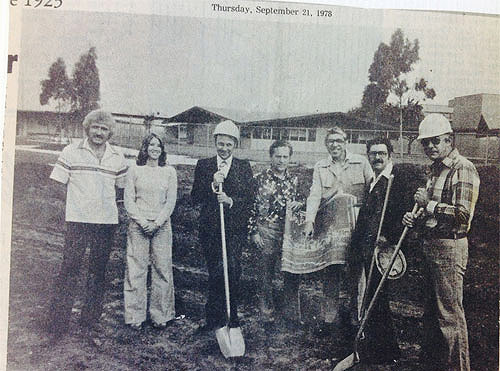 1949 – Former Los Alamitos Mayor Marilynn Moore Poe related that beginnings of the idea for The Youth Center came after the death of longtime volunteer and Chamber of Commerce President Grace Johnson. Marilynn’s childhood neighbor, William C. Poe, Jr. was the only attorney in town and a member of the Business Men’s Association. He suggested that the proceeds of the upcoming Fall Festival, sponsored by this organization, be used to build the Grace Johnson Youth Center, in honor of her. With the help of many other community organizations, enough money was raised to build a concrete pad on the lot on Katella Avenue, which was donated by William C. Poe, Jr. This pad was the focal point for many of the town’s activities. The annual Fall Festival was held around the pad, community churches held skating parties for their youngsters among many other activities.

1952 – William Poe, the only attorney in town, assisted Los Alamitos Race Track entrepreneur Frank Vessels with his proposal to apply to the State of California for an additional race day and donate the proceeds to from a race at his Racing Meet to the Youth Center fund. California State racing law prohibited fund from going to an organization named for a person so the Grace Johnson Youth Center became the Los Alamitos Youth Center as one of the track’s local charities.

1954 – Building activities in northwest Orange County picked up, and a principal building item was a $50,400 (over $400,000 in current dollars) for the Youth Center in Los Alamitos, according to the Enterprise newspaper. In February 1954, Tom Harris, chairman of the building committee for the Youth Center said he’d hope the construction would be completed this year. The finished building would cost between $25,000 and $40,000. He told members of the committee that 14 groups were now active in the Youth Center program, and that it is extremely successful.

1956 – The pad for the developing Youth Center is open for roller skating and basketball. The Boy Scouts used the facility for their Court of Honor, and the Business Association planned to use it to host their annual Christmas Party. It was used for the Los Alamitos Festival. The Girl Scouts and Cub Scouts also used the facility.

1957 – Frank Vessels donated $10,000 in materials and supplies, also hiring an architect. With the assistance of other service organizations in the community, the Youth Center located on Katella Ave., was constructed and opened on Dec. 7. In the late 1950’s, Don Mitchell, a member of the Youth Center’s Board of Directors, became involved as a volunteer in the Los Alamitos Charity Race Horse Foundation. Through his efforts and support of the Board, the Youth Center was able to secure funds on an annual basis to help offset program costs.

1960’s – The Los Alamitos and surrounding communities of Rossmoor, North Seal Beach, portions of Cypress and Garden Grove continued to grow in population.

1970’s – It became apparent that due to a growing population, that the Youth Center had outgrown their existing facility, and the Youth Center Board of Directors began looking for another site.

1971 – Original Youth Center building is sold and made into office buildings. Los Alamitos City Council expresses enthusiasm for plans for a new Youth Center, presented at a council meeting.

1972 – The Youth Center signed a land lease agreement with the City of Los Alamitos was signed, initiating dreams of a new larger Youth Center.

1973 – Negotiations began between the City of Los Alamitos and Youth Center in an effort to reach a joint powers agreement for construction of a multi-use recreation center. The joint powers agreement was approved and signed, and the Youth Center owned property was sold to a local businessman. Soon after, the County of Orange was added to the agreement. The Anaheim Union High School District entered into the agreement as a fourth partner, and the District allocated funds plus approved use of the land on the Oak Middle School campus for a gymnasium. In August, the Orange County Board of Supervisors approved allocation of $150,000 from federal revenue sharing funds for the construction of a new Youth Center located adjacent to Oak Junior High School.

1975 – Ground breaking for construction of a new 7800 sq. ft. recreational and social center as well as a gymnasium complex was made for a site on Oak Street.

1976 – Plans were made for opening the new Youth Center at the present Los Alamitos Community Center on Oak Street. The Youth Center participates in a joint effort to build the new gym at Oak Middle School.

1978 – The Youth Center began bingo games as an effort raise funding in order to strengthen its’ programs and community services. The Teen Center has its groundbreaking adjacent to Oak Junior High School. The $149,000 building financed with Federal Housing and Community Development Act funds, will have 3,352 square feet of floor space and is expected to be completed in early March.

1979 – The Los Alamitos Community Center and Oak gym were completed. Dedication of the Teen Center took place in September.

In the late 1980’s or early 1990’s – The Youth Center Afterschool Instrumental Music Classes began on several elementary school campuses in the Los Alamitos Unified School District for students in 3rd, 4th and 5th grades. This was in reaction to budgetary restrictions within the school district, which resulted in a lack of fund for the arts.

1990’s –Oak Middle School is closed due to shrinking enrollment. In 1993, the Youth Center had its’ first half-day Summer Camp at Rossmoor Park.

1995 – Oak Middle School reopens and, with it, a free afterschool program at the Youth Center was born, populated with more than 100 children daily.

Revenues from Saturday Night Bingo, the single largest source of revenue, begins to erode due to the proliferation of for-profit bingo halls and the end to indoor smoking. Board begins to look for other sources of funding. The Youth Center hires an Executive Director with fundraising and program development experience.

1997 – The first Community Support Campaign was launched with an established goal of raising $50,000. It that inaugural year over $70,000 was raised and thus began the tradition of annual giving to fund YC programs. Over the years in excess of $1 million has been raised.

First Summer Youth Center Resident Camp in San Bernardino Mountains in collaboration with Los Altos YMCA. After 3-years the program was cancelled due to lack of participation.

1999 – The Youth Center, with the support of Ganahl Lumber Company, establishes the annual sale of Christmas Trees.

2000-2001 The Youth Center was introduced to the program by a student at Los Alamitos High School who had learned about it during a summer trip to the Pacific Northwest. That student is now an Assistant District Attorney in Orange County.

2005 – The Youth Center’s After School Elementary Music Program was expanded to include all elementary school grades K-5th.

2006 – Youth Center opens up for elementary school children, while serving middle schoolers in the community.

2014 – The Youth Center holds their first A Night Among the Stars Awards Ceremony, recognizing local philanthropic youth for their volunteer work.

2018 – The Youth Center reaches 1 million hours of service to youth in local community.

2020 – The Youth Center gets shutdown due to COVID19 and cancels fundraising events. New partnership with The Plaza is created and new program Childcare for Essential Workers opens. Many programs are offered online for the first time.